Hall of Fame induction Class of 2012 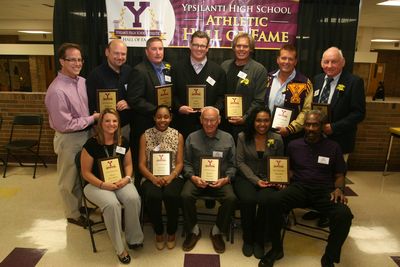 GREG BOIK – YHS 1973 – Mr. Boik lettered in football, wrestling, and track. He was captain of both the football and wrestling teams. From 8th through 12th grade, he and his classmates lost only one football game. Greg was named to the 1st Team All-State in football in 1972. He was the heavyweight state runner-up in 1973. During his senior year, he pinned 32 consecutive opponents, a national high school record. Greg was recruited by Ohio State and U of Michigan football, attending Michigan. He coached football for 6 years at Alcona High School. Greg currently lives with his family in Mikado, Michigan where he owns Hunt’s Paddles and Putts and Boik’s Rustic Furniture in Oscoda.

JOHN DIGNAN – YHS 1989 – Mr. Dignan lettered in football, basketball, and baseball. He earned All-Conference twice in football and three times in baseball. After playing football at Michigan State, John coached football at high schools in Ypsilanti, Willow Run, Ypsilanti Lincoln, Walled Lake Central, Milford, and U of D Jesuit. He coached college football at Maryland and Eastern Michigan University. He was a high school principal at Lincoln and is now a high school principal in the Warren Consolidated School District. John lives with his family in Farmington Hills.

TODD HENDRICKS – YHS 1987 – Mr. Hendricks lettered in football, swimming, and baseball. He was captain of the football and baseball teams. Todd quarterbacked the 1986 football team to the State semifinals. He pitched the 1986 baseball team to the State Championship and was the winning pitcher in the championship games for league, districts, regionals, and state. Todd pitched his Connie Mack team to a National Championship and was the winning pitcher in the state, regional, and World Series championship games. Todd earned academic All-American honors at YHS. He earned All-State honors in both football and baseball. While pitching at Eastern Michigan University, he was a two-time team captain, 1989 EMU team MVP, and played minor league baseball. Todd is a Washtenaw County Sheriff and lives in Ypsilanti with his family.

RICHARD LEE (DECEASED) – YHS TEACHER, COACH ATHLETIC DIRECTOR – 1950’S – 1970’S – Mr. Lee had a long and distinguished career in education. He was a most respected and professional educator/coach. Richard coached numerous track and field and cross country state champions and All-State performers. His cross country teams in the 1960’s were outstanding earning state runner-ups in 1959 and 1961, and winning the State Championship in 1960. After leaving Ypsilanti High School, he continued his career as athletic director in the Hartland School district. He was a positive role model and influenced many students in the Ypsilanti School district.

WENDELL LEWIS (DECEASED) – YHS 1971 – Mr. Lewis lettered in football and wrestling. In 1970 he was named to All-State Football team. In 1970 he placed 4th in the State wrestling tournament. In 1971, Wendell went undefeated at 43 – 0 winning the State Championship. He was noted for his dominating style and slick takedowns. Wendell was a most exciting wrestler. In 1971 he was named a High School All-American.

BOB PERRY – YHS – 1954 – Mr. Perry lettered in football, basketball, and tennis. He was the 1954 YHS All Sports Trophy recipient. Bob was a two-time captain and two-time regional champion in tennis. He played 2 years of basketball and 4 years of tennis at Michigan State Normal College (Eastern Michigan University). He was a two-time captain and two-time singles and doubles conference champion at EMU. He continues to play and compete in tennis today winning over 200 tournaments and holds high age group rankings in Alabama, Florida, the southeastern regional, and the nation. He lives in Birmingham, Alabama, with wife and family.

ROBERT RAHAM – YHS – 1949 – Mr. Raham lettered in football, basketball, and tennis. He was a member of the 1948 YHS State football Champions. Robert was the 1948 state tennis doubles champion and 1949 state doubles runner-up. He served in the U.S. Air Force as an air traffic controller. He graduated from Michigan State University in 1957 in business. Robert was very active in community activities and the Kiwanis. He retired as a CPA and lives with his family in Saline, Michigan
.
ALISON RICCOBONO – YHS – 2001 – Ms. Riccobono lettered in volleyball and swimming and diving. Alison excelled in diving for four years at YHS, earning All-State honors all four years. She placed 6th in 9th grade and 2nd in 10th grade. Her junior and senior years Alison was the diving State Champion and was ranked nationally at # 2. Her senior year, 2001, she broke diving pool records in all her events. In college, she was a diver for one year at the University of Kentucky and three years at Penn State. Alison was All big Ten, a two-time NCAA qualifier, and NCAA All-American honorable Mention. She coached diving at YHS, EMU Club Team, and St. Lawrence University in New York and is now the coach at Marysville University in St. Louis, Missouri, where she now lives.

JIM SEPANEK – YHS – 1980 – Mr. Sepanek lettered in football and baseball. He was named All-conference twice in both football and baseball. Jim went on to play college baseball at the Air Force Academy, Eastern Michigan University, and Michigan State University. In 1985 he was named MSU’s MVP in baseball. He was the Big Ten homerun leader and named to the All Big Ten baseball team in 1985. Jim earned his BA from MSU in 1985 and his MBA from San Jose State in 1991. He is active in his community. He lives in Manhattan Beach, CA with his family.

TANISHA WILLIAMS – YHS – 1999 – Ms. Williams lettered in cheerleading, basketball, and track and field, varsity all four years in each. She was captain of all three. She was her team MVP in basketball. Tanisha excelled in track and field in the long jump and the hurdles. She was All-State all four years of high school. In 1998 Tanisha was the indoor state champion in the long jump. In 1999 she won state championships in the long jump and hurdles in both indoor and outdoor. Tanisha was named 1999 Michigan Gatorade Circle of Champions Athlete of the year, 1999 Midwest Athlete of the Year, 1999 Michigan Athlete of the Year. She continued her success at the University of Michigan where she was named the 2002 U of M Outstanding Track and Field member. Tanisha lives in Ypsilanti and is active in Abundant Life Ministries.