Hall of Fame induction Class of 2006 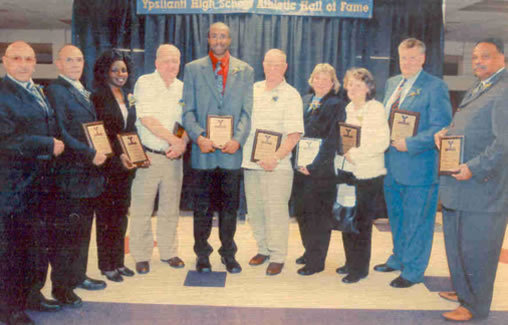 “Sports involvement teaches you to work and get along together, to take criticism without taking it personally, and to use it to grow. It’s all been helpful to me in my career and in my life”. Bob England

“Ernie Gillum helped set the gold standard for what it means to be an Iowa State Wrestler. He will be remembered not only for his many accomplishments on the mat at Iowa State, but for the many lives he touched in his teaching and coaching career. Ernie is responsible for so many kids getting high school diplomas and college degrees. He was a real advocate for diversity. Whether it was the classroom, wrestling mat, or at his church, Gillum lit up the room wherever he went. Ernie was truly one of Iowa State’s greatest contributions in teaching and coaching young men and women.”

“ Athletics taught me discipline. It taught me it is easy to be the top, but it is hard to stay on top”. Dennis Lewis

“Sports prepared me for life. It taught me patience and tolerance; how to take the good and the bad; and when you succeed, to be gracious. I learned through athletics never to give up and when you fall to get back in the race”, Bishop Dwight Walls, Sr.

Mr. Waterman and his wrestler parents, fought to keep wrestling and brought the sport back to be one of the most successful programs at YHS and in the state

“He was a hard coach but he taught us to win on and off the mat. He was a passionate man. He wanted us to win but he wanted us to learn to lose gracefully”, Ernest C. Gillum III.

“Being part of the track team taught me self-discipline.” – Nicole Wilson

“Nicole came to practice energized, ready to work hard. She was a “sparkplug” that always did what was right.” – YHS track coach Tom “Mick” Micallef